Through ‘Little Hell’ and Back

This past Monday (Labour Day), my girlfriend and I celebrated the occasion by taking our third day off of the summer. The weather was absolutely cracking, and the open road called out. Because we’re both into hiking, and hadn’t had much opportunity as of late to indulge, I suggested just that. She agreed. I then suggested one of the things I’ve long had on my list places to visit, the system of trails in Dromore. Created and maintained by Island Trails, it is recognized as the province’s portion the International Appalachian Trail. It seemed as good a time as any to check it out, a point with which she concurred, and so that’s precisely what we did.

If you’re familiar with the Island’s lot system, you can find Dromore in 37, to the south of Mount Stewart and a stone’s throw east from Fort Augustus. According to that titan of toponymy, Alan Rayburn (Geographical Names of Prince Edward Island), Dromore owes its name to one Father Brady, who, around 1850, is said to have called it after the Dromore found in County Tyrone, Ireland (it could also have been derived from counterparts in counties Clare and Down). Rayburn also notes that prior to its present incarnation, Dromore was known by early settlers as Little Hill Road, which by times – supposedly owing to the numerous quarrels between neighbours – became Little Hell Road. Unfortunately I can’t provide more context than that, but it definitely sounds like something meriting further research and just screams interesting story. How could it not? If you happen to know more, please drop me a comment below.

Anyway, the most efficient way to get there, especially if you’re coming from Stratford or points west, is to take the Trans-Canada Highway (Rte. 1) and pick up the 48 Road in Hazelbrook. Stay the course until you come to Rte. 216 in Avondale, hang a left, and proceed north until you come to the intersection of Rtes. 216 and 214. At this point, you have two options. There is a small parking area just north of the intersection, on High Bridge Road, where you can pick up the South Loop trailhead; or, you can turn left onto Rte. 214 (Dromore Road), and follow the dirt until you come to Campbell Road, the main entrance to the trail system. After great deliberation, we opted for the latter.

Now, as we were soon to discover, the Campbell Road is an old, single-track forest lane, quite hemmed in by trees. At first it didn’t seem too inviting, especially behind the wheel of a low-riding Honda Civic; however, the sign at the entrance promised parking could be found not quite two kilometres inland. What to do? A second round of deliberation, and caution thrown to the winds as we forged ahead. It proved an interesting drive and well worth the effort, and indeed we were eventually rewarded with a spacious parking area that placed us within easy access to three trailheads, those being the North, Centre, and Birding loops (your best bet for the South Loop is parking option numero uno, above).

Deliberation on the matter of whether or not to venture down Campbell Road was followed by another round of deliberation, this time on the issue of which trails to explore. There was a bit of himming, then hawing, some swatting of mosquitoes, more swatting of mosquitoes, and finally a decision: The North Loop, followed by the Birding Loop, both of which wind through dense woodland and at points take you along the Pisquid River. While we both thought the Centre Loop looked appealing on the map, we’d come without any bug spray, and felt we ought to play it safe by sticking to shorter routes for the time being. It was a smart move.

If you know the Island, then you know that it is by no means characterized by its elevation. More its lack thereof. That said, I was pleasantly surprised to find elevation along some portions of the trails, and was suitably impressed by the absence of noise other than what you would expect to hear in a wooded area. The size of some of the trees along the way is also noteworthy, especially the birch trees on the Birding Loop, which rank as some of the largest [birch] I’ve ever seen. All told, it was time well spent and we fully intend on returning sometime after the weather turns to tackle the last two loops.

Now, I actually hadn’t wanted to write a great deal today, as I feel I’ve made you read enough the past two Wednesdays. But I just checked my word count and I’m up over 900 words – my bad. Anyway, I’m going to stop here and present you with a selection of historic maps of the area encompassing the trail system. One of my favourite things to do is visit places around the Island, and then retrace my movements through old maps to see how things have changed – or not changed – over time. Weird, I know, but I like it. The images you’re about to see have been cropped from maps found on the site Island Imagined, an excellent repository of Island cartography and a dear, dear friend of mine. 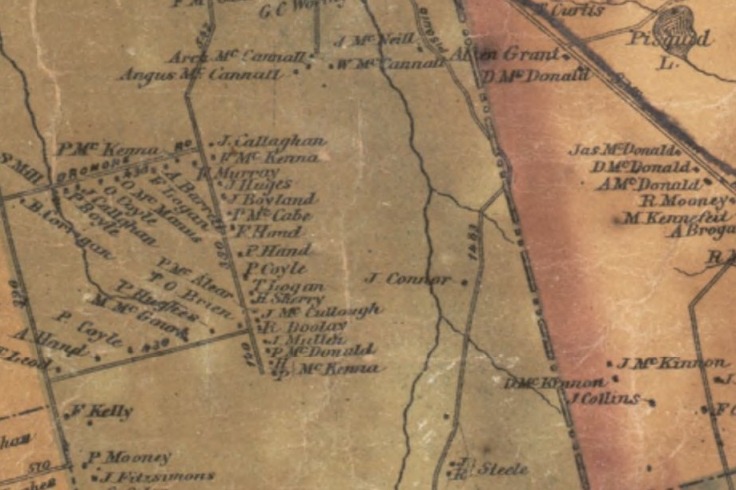 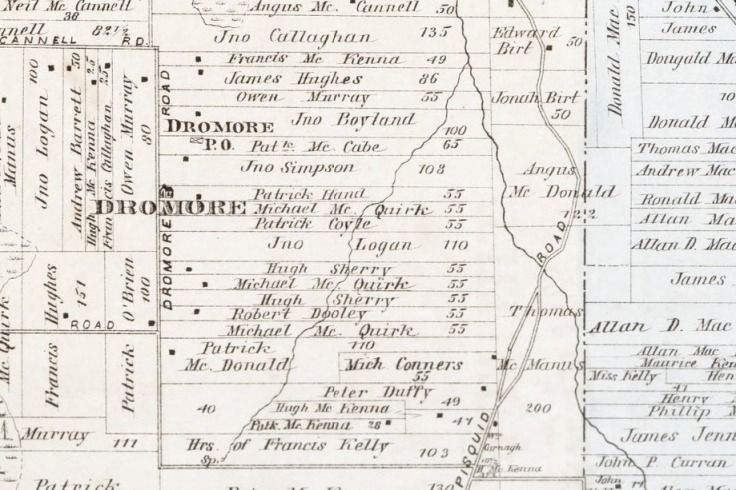 The Lake-Meacham-Cummins trio is always my go-to for providing a quick snapshot of an area over 65 years. As you can see, quite a bit of continuity, but certainly the Dromore of today is nowhere near as densely populated as it once was. 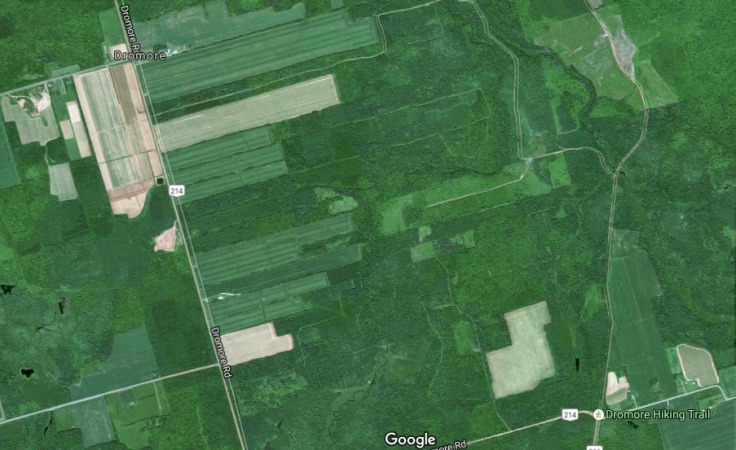 Well, that’s all for now. If you’re into hiking and the great outdoors and the like, I encourage you to make the trip out to Little Hell Road – you won’t be disappointed. And for more information on the Dromore trail system, and others across the Island, please visit http://www.islandtrails.ca/en/index.php