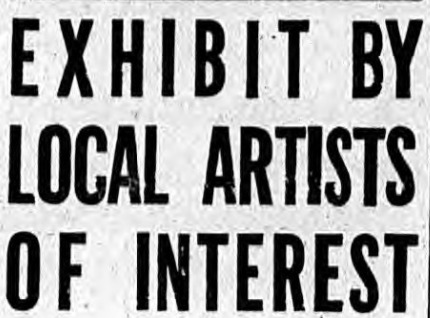 One day some years ago now, when I was gainfully employed at the Artifactory (see A Date with History if you need the backstory), I had a bit of a startling encounter with history. Admittedly, such encounters are not an uncommon there (a dime a dozen, really), but this is one that has stayed with me. As per my custom, I was somewhere in the furthest reaches of back storage, probably conducting an inventory of some sort (or just wandering around – I can’t quite recall). As I turned a corner, completely absorbed in my own little world, I came face to face with – of all things – a foot-and-a-half high, fired clay gargoyle, perched at eye level on a shelf. Certainly not something you expect to see. I was momentarily taken aback, a bit unnerved, but quickly recovered. Wrapped up as I was in such diligent pursuit of my work, I then forgot about it, and it would be a while before I learned it had been sculpted decades ago by a famous Island artist, the subject of our final post for Women’s History Month 2016.

Accomplishment(s): Noted miniaturist (and later sculptor/potter); the Island’s first professional woman artist; possibly the only Islander to join the ranks of the Women’s Art Association of Canada (WAAC).

Mary Allison Doull (or ‘M.A. Doull’, as she liked to sign her work) is a figure whose story deserves to be more widely known and talked about on the Island than it has been. Some of you may know it, but I daresay the majority of you are probably encountering it for the first time today. To my knowledge (and I’m certainly no expert), Doull is one of the only artists born and raised on the Island – and probably stands alone among women of that calling – to ever truly figure into professional artistic circles with the likes of, among others, Emily Carr.

Not bad company at all.

So now that I’ve got you hooked, I refer you to this excellent write-up by Sandy Kowalik. In terms of informing yourself of the fast facts on Doull, it’s really all you need.

Once you’re through with that (it won’t take you long), I would also recommend checking out this 2010 entry from Ian Scott over on peipottery.blogspot.ca. It contains some great photographic samples of Doull’s later work with clay, as well as images of the studio she established in Cape Traverse in her retirement.

Well, that’s a wrap on our Women’s History Month project. I’d like to thank you for taking the time over the past few weeks to read what I’ve posted. I hope you were able to get something out of it (I know I did). I also know that there are many more stories of trailblazing women from Island history to be told, so if you know of any, send names and details my way and I’ll keep a running list for future reference. No reason why we can’t be sharing them all year round!

5 thoughts on “The Artist”